We Swerve For Gators

Today we rode a loop from Apalachicola to Port St. Joe and back. For whatever reason we ended up riding the 53 miles at a pretty brisk pace, right up to the time that Kathy’s back went from aching to spasm. She seems to be a bit better now and claims that she’ll be able to ride in the morning. We’ll see. 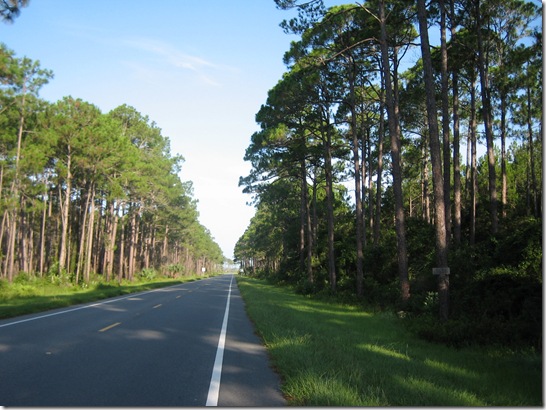 Highway 98 outside of Apalachicola 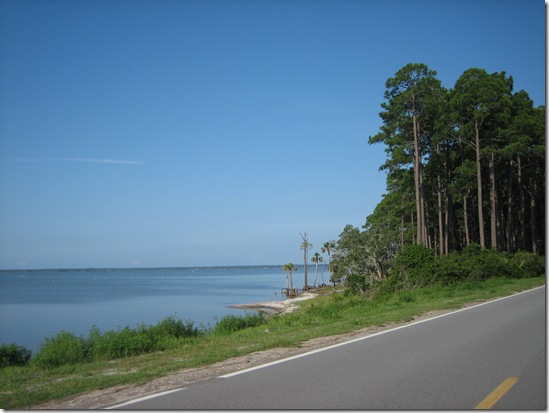 Highway 30A along the coast

We were on the road shortly after 8AM as planned. We headed west on 98 then took the long way to Port St. Joe on 30A. Route 98 has nice wide shoulders but 30 has none at all. It hardly mattered because there was barely any traffic until we got close to Port St. Joe… unless you count the five foot alligator who was cutting a perpendicular path across our lane of the highway as our train approached. It was pretty funny to see him suddenly switch into reverse and start backing up into the grass. Kathy and I were at the front, but word from the rear was that our prehistoric friend was hissing at them by the time the last bike went by. Linda was careful to point out to Neil that there would be no stopping to fix any flats if they were to get one! (I wish we had gotten some photos, or even better, some video.)

The plan was to find a cafe or little local place in Port St. Joe to take a break and get something to eat. We didn’t factor in the fact that it is Sunday and Port St. Joe does not have the tourist orientation of Apalachicola. The only places that were open were McDonalds and Burger King. Now, you would have to look pretty hard to find a group of eight people who are more antagonistic toward fast food that this one, so this was not a happy turn of events. In desperation, however, we pulled into Burger King. Harris was first into the buiding, but emerged quickly, declaring that the interior literally smelled like shit and that he could not eat in that environment. The others who had gone in followed shortly thereafter, and we moved next door to a convenient convenience store, where we took a short break.

Back on the bikes, we picked up where we left off, heading back to Apalachicola at around 18 mph – a straight shot on Highway 98. Just outside of town we stopped for lunch at the Red Top Cafe, across from the Best Western where the Tour de Fred crew spent the night last year. Once inside I remembered that I had found the food to be just fair and expensive. I will say that they are consistent, as this year the food remained just fair and expensive. So far it has been the only meal we have had that was not very good or better. I should be more positive than that. The food in the restaurants in town has been remarkable in taste and creativity. Everyone has been very happy with their meals.

By the end of lunch, Kathy’s back was significantly worse. Earlier, Neil had passed on lunch and had ridden back to the house, promising to return in the car to pick up Linda. Kathy caught a ride back to the house with them and I rode back solo.

Tonight we had dinner at the pub in the Gibson Inn. We had a great waiter/screenplay writer, and wonderful food (again), this time along a primarily Japanese theme. Most of our group had sushi-style dishes of one sort or another, but I opted for a goat cheese and carmelized onion “pizza” and garlic fries. The fries were good, but the pizza, which was more like a round flatbread kind of thing, was really excellent. Many of us finished the meal with ginger ice cream, also wonderful. To top it off, it was very reasonably priced.

On the short walk back to the house, Kathy was clearly uncomfortable, so I am prepared to forgo riding in the morning if it should be necessary. Tomorrow we are planning to go back to St. George Island. We enjoyed that ride and want to share it with the Samuels.