Above is my typical ride lately -- generally a leisurely 15 to 20 miler near my house on the fixed gear. And if it were not for the "new" old bike I recently got from a friend, I might not be doing even THAT much. A new bike, or piece of equipment, always generates a bit of enthusiasm for getting out on the road again. Nevertheless, my rides have been primarily short ones because of time, weather, a tandem stoker who has been troubled by knee and hip issues this fall, and my talent for coming up with excuses.

Fred and I had a great tour lined up for 2014, but when our plans fell apart in the spring, so did my motivation to train and to do long rides. The result is that I will finish this year with about 1,600 total cycling miles. In the past 15 years, my average mileage has been more like 3,000 to 4,000, and even higher a time or two. The main factor is probably the absence of training and touring miles. That should not be the case in 2015, though. We already have a great tour picked out, and all three of us (Ray will be riding with us again) have bought non-refundable airline tickets to show our commitment.

The plan is to do the classic UK tour called End-to-End, or LEJOG, or JOGLE, as you prefer. It involves cycling from John O'Groats in the extreme north of mainland Scotland, to Lands End in the tippy-toe of southwest England (JOGLE) or the opposite way (LEJOG). There is no fixed route, really, but tons of people do it every year, so there is no lack of suggested routes. The fastest, safety-and-scenery-be-damned route is about 900 miles. We are going to follow a safer and more picturesque route, though, and will end up with 1,100 miles or so in 14 to 16 days.


Posted by Seth Krieger at 6:26 PM No comments:

Definitely NOT a Touring Bike (but still fun) 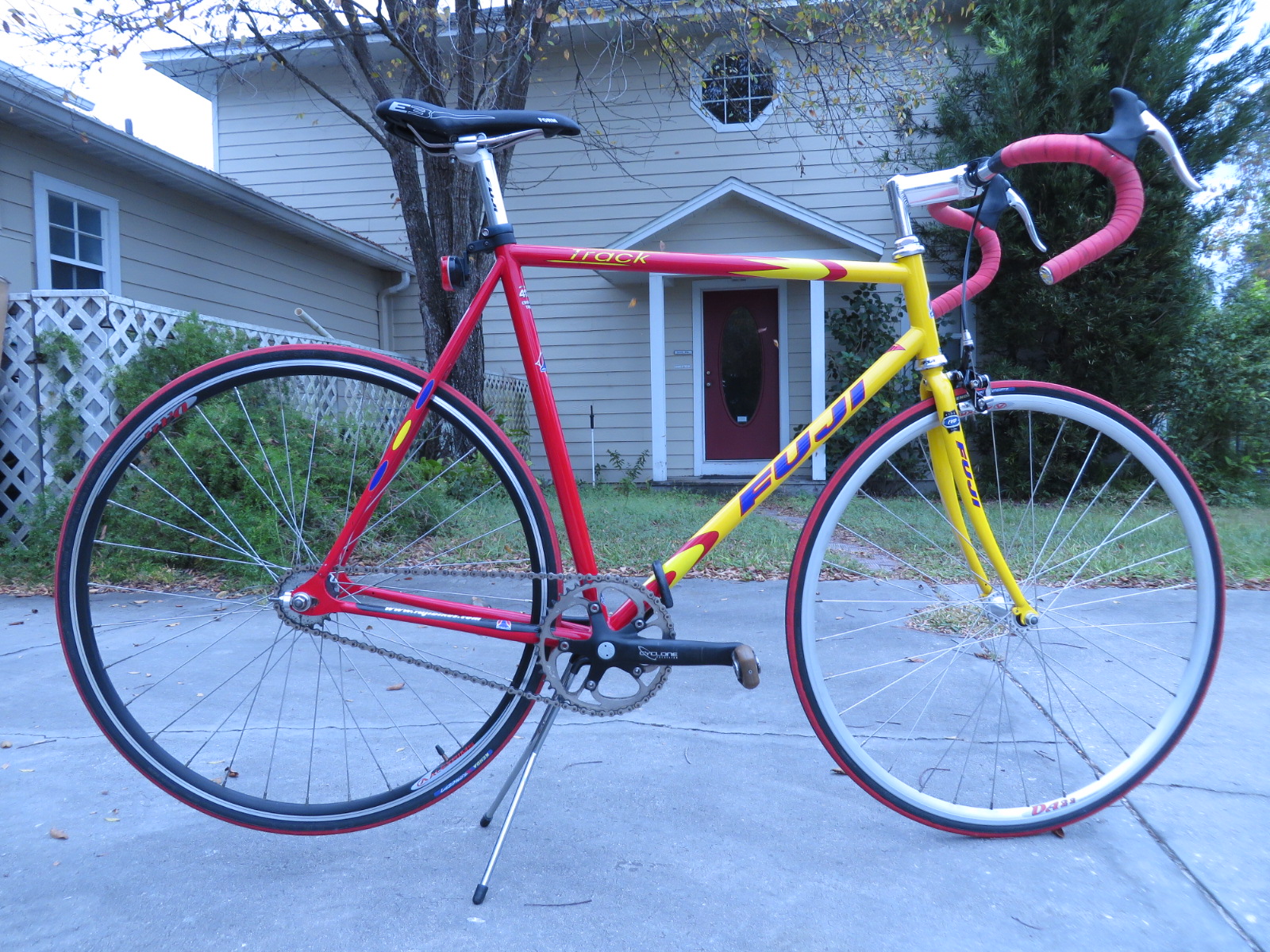 On a recent visit to my friends Larry and Meg in New Jersey, I noticed a bike behind some unpacked boxes during a tour of their beautiful home. Further inspection revealed the bike to be a Fuji Track, a fixed-gear model theoretically meant for use in a velodrome, but now used by most riders as an urban "fixie". The bike, vintage early 2000's, had belonged to Meg's late husband, Ron Stone, the sorely missed principal of Newark's Weequahic High School. Ron brought this inner city school back from the edge, a story documented in the film "Heart of Stone". I never had the pleasure of meeting Ron personally, but I am quite sure he would be pleased that Meg has found a new home for his bike with me.

Getting the bike down to Florida was a bit of a challenge. I had assumed that it would be easier and cheaper to have a local bike shop pack it and ship it, rather than packing it up myself and shlepping it with me on the plane.  Once back in Florida I make some calls and found a shop a few miles from Larry and Meg's house that would pack it up for a reasonable $50. Larry dropped the bike off and relayed the details a day or so later: the box weighed 37 pounds and measured 53 x 30 x 9. I entered those numbers on the UPS and Fedex sites and discovered that the box was 3 inches too big, putting it in an oversize category that made shipping much more expensive. I called the shop, but they insisted this is the only box size they have. In the end I went with Fedex "Home Delivery" (ground service), which ran about $118. UPS was considerably more -- like $150 or $160! If the shop had used a 3 inch shorter box, the shipping cost would have been about $50. By comparison, back in the day (pre-2006) Kathy and I shipped our tandem to and from upstate NY in a huge, BikePro Race Case for about $100 each way. The case with the bike in it weighed something like 90 pounds, as I recall. Times have changed, I guess.

ANYWAY... the bike appeared at my house three days later. Even if there were a velodrome next door, the chances of me riding on an actual track are nil, so my plan was to add a front brake and use it as a "fixie". Riding a fixed gear is reputed to be both fun and good training. The late, great Sheldon Brown has several pages dedicated to the topic and the virtues of fixed-gear bicycling.

Since the bike arrived, I have added a front brake (twice, actually, because after the first time I found some narrower handlebars I like better) and some chain tensioners to make it easier to get the rear wheel centered more precisely. On the second brake installation, I also mounted a brake lever on the other side of the handlebar for comfort and a more balanced look, even though the second lever isn't attached to a brake. I will be doing more pimping of my new ride as time goes on, I am sure.

My first ride was about 11 miles, starting at my house (meaning there are hills that cannot be avoided). I found that it is really not much of a problem to climb hills up to 7 or 8 percent with the current gearing (46 x 20), but more than that could be a bit much for my old knees. On the flats I easily hit 17 or 18 mph. The ride, however, was pretty harsh. I have already ordered some 25 mm tires (the widest that will fit in the fork) to replace the 23's that are on the bike currently. I'll run the 25's at lower pressure to give a more comfortable ride.

Ever since 2008, this time of the year has been when I have been on tour. One year (2010) we did something different, renting a villa in Provence with our wives and doing daily loops instead of a point to point trip, but it was still riding in a new place and blogging about the experience.

This year Fred, his wife Pat, Kathy and I all did a non-bicycling trip to Italy. Fred and I wanted to show our appreciation to our lovely wives for putting up with the five summers of cross-country trip. Here we are, engaged in our favorite Italian activity, eating! 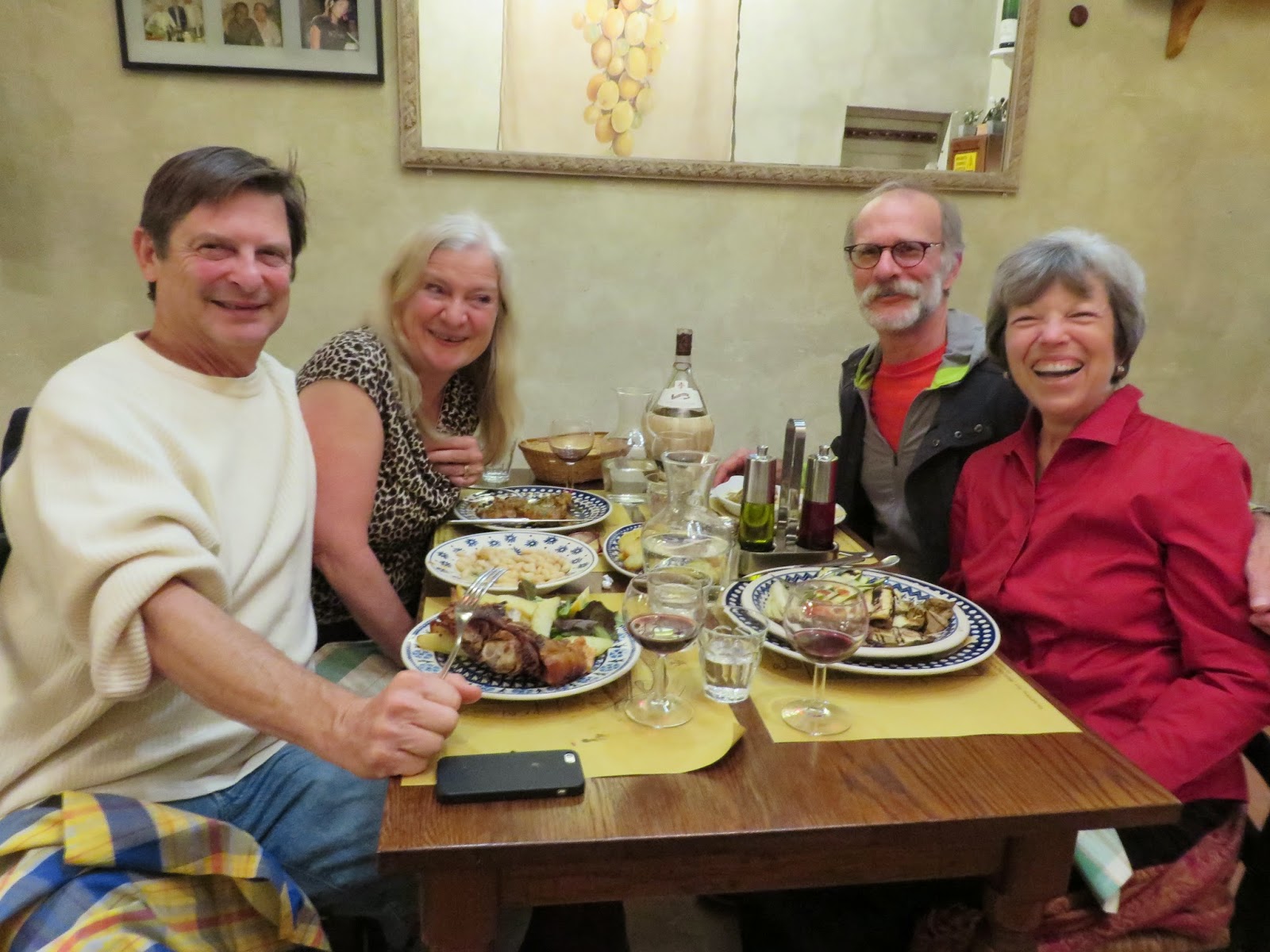 Fred and I figured we could still squeeze in a modest tour later in the summer, though. We considered a week of mountain riding in Colorado, then changed our minds and settled on nine days doing a loop from Seattle, across to the Olympia Peninsula, over to Victoria and the San Juan Islands, and back to Seattle. Alas, it was not to be. After our return from Italy I settled in to start planning the trip, but Fred shared that he had lost his enthusiasm for a bike trip this year. Although he didn't say as much, I figure he is just worn out from months of near-constant world traveling. He has been on sabbatical from teaching at U of Colorado, Colorado Springs, and has been away for much of the year so far, including three months in India, a week of family vacation, our trip to Italy, and is just now finishing up ten days lecturing in England. The guy really deserves some time to chill before returning to his teaching duties in August. We still plan to ride the length of the British Isles next summer, doing an approximation of the John O' Groats to Lands End ride. There is no set route for this tour, but the route described here, on the Traveling Two blog and by David Piper on his own blog look very good!

In the meantime, I am hoping for some long-weekend type tours here in Florida with a friend and with Kathy. We will see what develops.


Posted by Seth Krieger at 6:32 PM No comments: