Just checked and all the bikes are still there!

Yes, here they are, all snug in their allocated places in the garage. 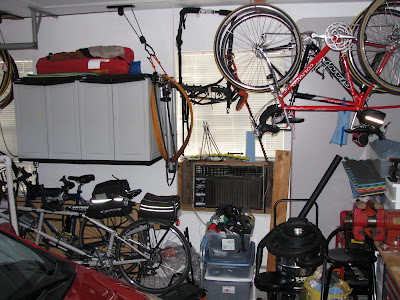 Last year I logged fewer miles than any other year since returning to bicycling in 1999. I might not have  hit even 3,000 miles, but I am not sure of the actual total because I was not even LOGGING my rides reliably! In 2010 Fred and I exchanged an episode of our cross-country ride for a fantastic, but low mileage, week of riding in Provence, France, so I did not spend the early part of the year training. In addition, I spent a bunch of time in Miami with my family when my dad was hospitalized in the late spring. There was a little burst of regular hill training for a few weeks prior to going to Colorado for the Copper Triangle in August, but my motivation has been low all through the fall. Kathy and I had an overnight tour planned for a weekend in early November, but that very morning her aunt died, so that did not happen either. Cold weather moved in that same weekend -- pretty early this year, which has spawned all sorts of excuses to avoid riding. Then there has also been an explosion of stuff at work that now has me spending a good portion of every weekend at the office.

This new year has started out very slowly bike-wise as well, but the calendar is full of spring events, and the basic plans have been laid for the next portion of our cross-country ride. This year Fred, Ray and I (the original trio) plan to ride from Colorado Springs to West Yellowstone, through some of the most beautiful landscape the US has to offer. Although this section is only 9 days of riding and less than 700 miles, it will probably be the most mountainous and challenging stage of the tour. I am very excited about riding through Teton and Yellowstone parks! Kathy and Pat will fly out and meet us at the end of the ride, at which point we will spend another week sightseeing in the Yellowstone and Jackson Hole areas. The first three of those days will be with Fred and Pat, followed by another four on our own.  At any rate, I expect to start laying down significant base miles by the beginning of March, and to be doing exclusively hill training rides by May. I have reservations to fly to Colorado on May 31. No firm plan has been set, but we also expect to spend a week riding with Steve and Debi later in the summer at a location in the southeast, reachable by car.

As the saying goes, "Man plans and God laughs." We'll see what the future holds.
Posted by Seth Krieger at 11:49 AM 1 comment: