I am sitting in the Dallas airport, waiting for my connecting flight home after a weekend in Colorado with my bike-touring buds, Fred and Ray (see my posts documenting the Tour de Fred in 2008). Back in early July I decided to join them for Colorado Cyclist’s third annual Copper Triangle ride.
Fred has done the two prior Copper Triangle rides, and Ray rode it last year as well. When I have asked them about it in the past, 90% of what I heard was how cold their hands were. A visit to the Copper Triangle web site filled in the details: three high passes (Fremont Pass: 11,300 feet -- the ascent being the first 12 miles of the ride; Tennessee Pass: 10,500 feet – interrupting the plunge from the Fremont high; and Vail Pass: 10,600 -- from the decidedly evil side). The route is about 80 miles and climbs a total of 6,000 feet. It also warns that the ride start (at 5:45 AM, if you please) would likely see temperatures in the low 40’s, paired with highs in the 80’s by the end of the ride. 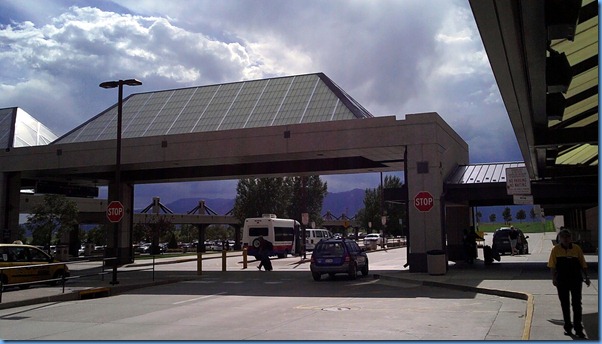 I arrived in Colorado Springs, where Fred, Ray, and their lovely wives live, at about 4 PM. My bike case unexpectedly appeared on the carousel as I walked up. I spent the quarter-hour until Fred arrived sitting in front of the delightfully small, modern, and un-crowded CS airport, enjoying the hazy view of the Rockies to the west (photo above). It had only been a bit more than a month since I had last seen Fred (during our fantastic week in Provence, France) so it was like we just picked up our conversation where we left off a few weeks earlier. Upon pulling up to Chez Coolidge, we immediately headed next door to say hi to Ray and his wife, Jean. As it turns out, Jean answered the door and I probably spent twenty minutes or more catching up with her and her adventures with the health-care system (which have ultimately turned out very well) before paying any attention to Ray, but he didn’t seem to mind.

The afternoon thunderstorms moved in and we jogged back next door to Fred’s garage. I set to work re-assembling my bike, while Fred inexplicably decided it would be a grand time to climb up on the roof to search and destroy a wasp nest that had been reported by his wife Pat. Ray supervised both activities while appreciating a bottle from Fred’s garage beer bin. Jean soon showed up as well, offering Fred a golf club and a kite with a key to take up on the roof with him, given his apparent belief that the current thunderstorm should in no way interfere with his planned activities.

This was my first trip with my touring bike since retro-fitting it with S&S couplers. The couplers allow me to break the frame into two sections and pack the entire bike in a case that meets all current airline regulations and avoids special bike, oversize, and overweight luggage fees. Our tandem has a coupled frame as well, but my experience packing the big bike didn’t really help much in packing this one. Having ruined a wheel rim on a previous trip with the tandem, I agonized over the best way to pack the touring bike to avoid similar damage. Much to my dismay, when I got the bike back together in Colorado, I discovered that both wheels had been knocked badly out of true, particularly the front one. Closer inspection revealed a spoke with a nasty, angular bend about 4 centimeters from the rim. I was pretty sure that the rear could be re-trued, but I was less confident about the front. Fred and I agreed to take both wheels to the local pros in the morning in the hope that they could be salvaged. If that was not possible, Performance Bike has a store in CS and had several adequate wheels and wheel sets on sale.

There was nothing more to do about that problem for the rest of the day, so we turned our attention to the pressing and important matters of:
The two other permanent members of Fred’s band, Chris and Scotty, soon appeared, joined by an auditioning drummer, Bob. We all took our places at the dinner table. To explain, Pat’s dinners are an important part of the compensation earned by members of Fred’s bands. Indeed, the food, drink, and inherent joy of music-making are often the only compensation, but they all seem quite ok with that.
This band has a long history of “hiring” a series of drummers with fatal defects of one sort or another, but they had auditioned a talented drummer the previous week, and the signs were favorable for Bob, as well. His social skills, general worldliness, sense of humor, and unpretentious knowledge of red wine impressed all of us even before the first impact of wood on skin in the basement.

Dinner was, of course, great. Afterward, the guys headed downstairs to get set up, and I broke out my laptop to see if anything important had appeared in my email during the day. Over the years, I have lost hearing ability (to the point that I now wear hearing aids to compensate for high frequency losses) and simultaneously have become hypersensitive to loud, live music. I was therefore a bit concerned about whether I would be able to deal with the practice session in comfort. Upstairs, the drums and bass seemed pretty loud, but even with my hearing aids, I couldn’t hear much of the vocals or guitar. After a while I decided to chance it and was pleasantly surprised. While I still couldn’t hear the vocals very well (probably because of the way the speakers were pointed), it sounded much better down there than it did upstairs, and I enjoyed being the entire audience. They were still at it when I finally headed up to bed.

We were at Old Town Bike Shop, Fred’s favorite local bike shop, when it opened on Friday morning. The young mechanic on duty proved to be very competent and he methodically worked his way around the front wheel. Pretty soon he had it both round, and very acceptably true, if not perfectly so. As expected, the rear wheel posed no problems and quickly joined its mate in a road-ready condition. The cost – just ten bucks, plus another five that I left as a tip. I felt like it was the bargain of the century. We headed back home to pack the truck for the drive into the mountains.

Ray has a luxo-cabin in Breckinridge, which is only a half-hour from the ride start at the Copper Mountain resort (familiar to many who ski in the Rockies). Colorado Springs, on the other hand, is almost three hours from Copper Mountain. Ray kindly put us up at for the night at the cabin, which was pretty damn good considering the ride’s early start time! We were joined by Ray’s delightful daughter Megan, who apparently has inherited her father’s athletic drive.

Ray was very keen on getting on the bikes by 6 so that we could be done before the typical afternoon rain. Ray did his packet pickup by mail, and Fred and I got our stuff in the afternoon after driving up, so we were at Copper and ready to ride right on schedule.

The temperature in the morning was probably in the mid-forties, but all of us wore plenty of layers, so the weather wasn’t a problem. It also helped that almost immediately we started the 12 mile climb up Fremont Pass, a gain of about 1,500 feet. Ray and Megan dropped us almost immediately, which wasn’t really saying much, given the speed I was going. I was determined to do the whole turtle (slow-but-steady) thing, having been warned that the fun doesn’t REALLY begin until the final climb of the day. Fred was a good sport and stayed pretty close, stopping every so often to let me catch up. Meanwhile an endless river of riders, of all shapes and sizes, rode past me, including portly women and a handful of couples on tandems. There were something like 3,500 riders, though, so there were always plenty behind me as well as ahead. There were lots of aid stations along the way, but we passed up all but two, where we refreshed our water, got some snacks and I caught my breath. The ride profile tells the story pretty well: 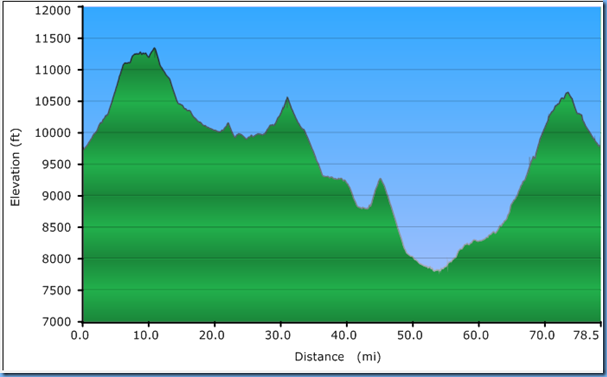 There were only a handful of short, steep sections, but even a five percent grade can be a challenge when it continues for mile after mile. The beautiful scenery was a very pleasant distraction, but there were times when the only thing I had on my mind was turning the pedals over and over and over and over. It was pretty sobering to realize at mile 55 that almost 3,000 feet of climbing remained, and there were less than 20 miles in which to do it. Nonetheless, I am happy to report that while many of the people who passed us earlier were walking portions of that last climb, we continued to pedal our way to the top of Vail Pass.

Was it hard? Oh, yeah. Am I glad that I did it? Absolutely. The fact that I could do this many miles in the high, thin air, without acclimation and in relatively poor condition, gives me a great deal of confidence for next summer’s continuation of our cross country trip. That segment is going to start in Colorado Springs, make its way through the northern Colorado mountains and diagonally across Wyoming to Yellowstone. I can’t wait!

Posted by Seth Krieger at 12:27 AM No comments: