While disassembling the bike in early July to pack it up for the trip home from the final leg of our cross-country tour, I noticed that the powder-coat finish on the bottom of the top tube, as well as in other places on the frame had become badly pocked. 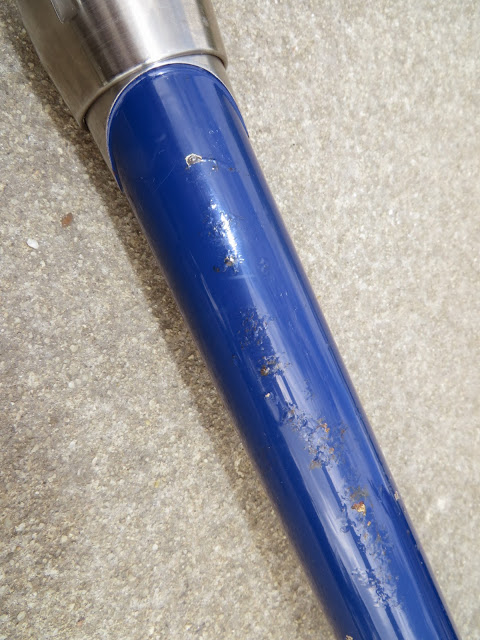 This is not really supposed to happen to powder-coat, which is why it is popular as a finish for touring bikes that sometimes don't get the best of care. The bike had been refinished when I had the couplers installed in February of 2010.

Since the trip, I have not riding as much, and when I have, it was on the tandem with Kathy. As a result, it was a while before I emailed the photo above to Steve Bilenky at Bilenky Cycle Works in Philadelphia, who had done the couplers and had subcontracted the powder-coating. He agreed that something was wrong and asked me to send him the frame for a closer look. Eventually I cobbled together a box and sent out the frame (but not the fork, which had a couple of nicks, but nothing like what was happening to the frame). His diagnosis after inspecting it in person was that the frame must not have been prepped adequately. In spite of the fact that three years had passed, he offered to re-finish the frame at a deep discount, using his current (different) powder-coater.

Unfortunately, they were unable to come up with an exact match for the color, so we decided to pick a different color that would look ok with the original-color fork. The frame arrived here about 10 days ago, but they forgot to include the bottom bracket, headset cups, and the coupler nuts with the frame, so I had to wait another week for those to arrive.

When the missing parts showed up, I installed the coupler nuts, put the two halves of the frame back together, and drove over to South Lake Bike. The new owner, Brett, quickly pressed in the headset cups, installed the bottom bracket, and thoughtfully applied Frame Saver to the inside of the tubes.

I spent yesterday afternoon and early evening getting the bike reassembled. You can see the result below. The dark blue fork looks a little unusual, but doesn't look bad with the light blue (RAL 5014 Pigeon Blue) I selected for the frame. What do you think? 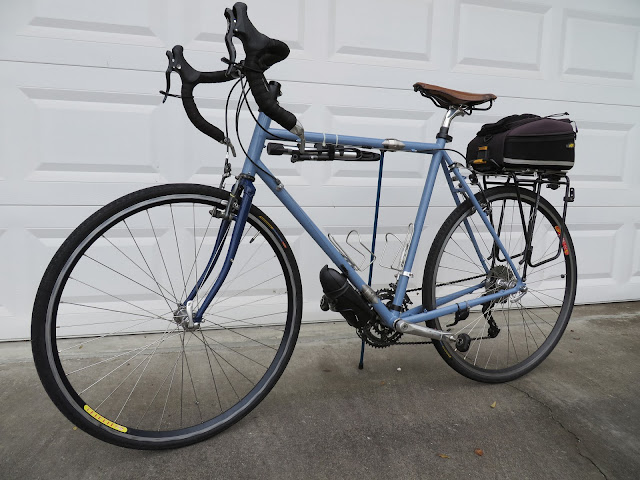