I took some Nyquil last night, slept well and woke feeling much better. Maybe it is allergies after all. My remaining issue is continuous pain in my right foot and shin. I can neither walk nor ride in comfort.

Anyway, we left Kremmling at about 8, when it was still chilly (low 40's). It stayed cool enough that I left my jacket on for the whole ride. We rode 61 miles in five hours, including about 2700 feet of climbing. The miles coming down from Muddy Pass were among the best I have ridden. Imagine a quiet, nearly empty road, slight downhill grade, new asphalt, lines of snow-covered mountains on both sides, and periodic sightings of elk, antelope, and hawks high above. It was spectacular. I have included a couple of photos of that stretch, but they can't really convey the experience. 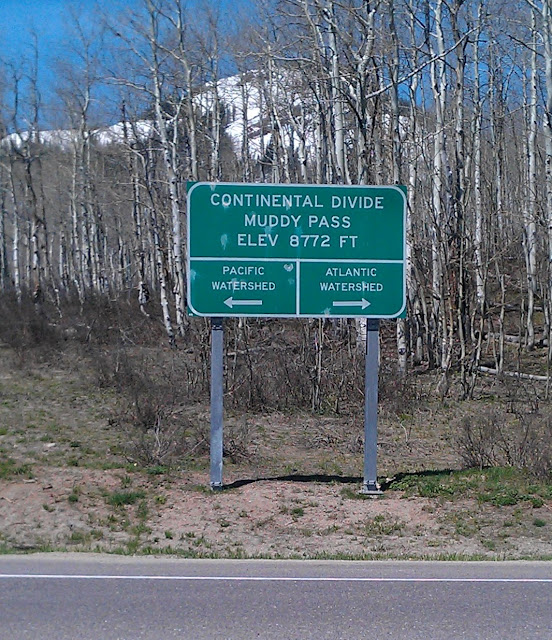 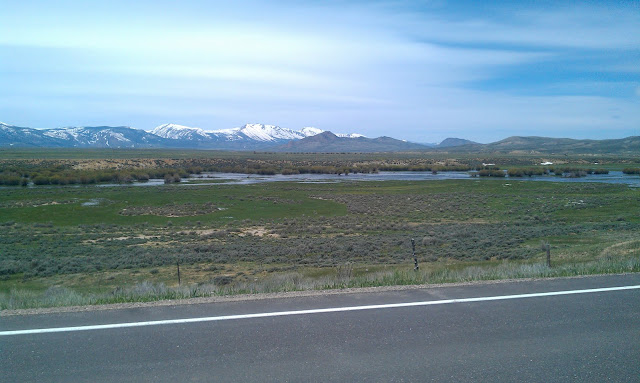 Whether related to the altitude, my allergies/cold, leg pain, or inadequate fitness level, I cannot comfortably keep up with Fred and Ray. They pull over to wait for me every so often, and they claim that it is 'no problem', but it is not ideal. Nevertheless, as an introvert, there are some benefits for me to ride by myself, so I am making the best of the situation.

Yesterday I woke with a sore throat and worsening 'allergy' symptoms that got worse through the day. As a result I got very little sleep last night. By this morning I was pretty sure that I have a cold. I am just trying to manage the symptoms in hope that it doesn't get much worse.
Today's ride was just the ticket under the circumstances -- a reasonable 60, mostly downhill miles, with a strong tailwind. In fact, there was only 1120 feet of climbing and the wind and down slope combined to give us relatively effortless speeds of up to 40 mph from time to time.
At about 21 miles we had to make an unscheduled visit to a bike shop in Silverthorne when Ray broke a drive-side rear spoke. We were very fortunate that we were in this fair-sized town and that a good shop (Mountain Sports) was in walking distance.
We are over-nighting at the historic Eastin Hotel. It is old but adequate, and very inexpensive. The town itself is one of many in this region that is just fighting to survive.
While we were waiting at the door for the proprietor to return from lunch, a French gentleman walked up with a big smile and immediately drew us into a discussion of bicycling and touring in the US and France. Jean-Paul is in the midst of a planned two month solo bike tour, including many of the places on our own tour. In fact, he was in Fairplay the night after we were there, and he is staying the night in our hotel. Of course we invited him to join us for dinner. It turns out that the cold, windy conditions in the past month have taken their toll and he has decided to cut his trip short. When we head north in the morning, he will be heading to Denver to make arrangements for his return to Marseille. If you read French you can learn more about him and his adventures at http://patacycliste.over-blog.com.

Jean-Paul's dinner selection was.... chicken-fried steak! I guess all his travel in the backwoods of the US caused him to go native.

While we were at dinner, a plump, mentally-challenged young women surveyed the people in the restaurant and walked right up to our table to get help setting the time on her new digital watch. Ever the knight for damsels in distress, Fred quickly volunteered his services. Apparently this is one of his special talents, and her special talent is to pick the right person in a crowd to help her! He had her all set in just a few minutes.

If you are ever in Fairplay for an overnight, check out the Hand Hotel. We were the only guests last night but we got the impression that the hospitality we were shown is typical. The property is old but nicely refurbished and maintained. Richard, the owner, recommended dinner at Millonzi's, a few doors down the street, which both Fred and I enjoyed greatly.
We rolled out of Fairplay at around 9 AM in cool but fair weather. Fairplay is at almost exactly 10,000 feet. We were headed for Breckenridge, on the other side of the 11,539 foot Hoozier Pass, the highest point on Adventure Cycling Association's Trans America Route. A couple of summers ago I rode up Hoozier from the steeper Breck side, so I wasn't too concerned. Of course, I didn't factor in my noodle legs and raw ass souvenirs from yesterday's ride. The climb started almost immediately at about 3 percent, but after 6 miles it pitched up to 5, and it stayed at 5 to 7 for the remaining 7 miles to the summit. My speed was stuck at 5 as well. By the top I was puffing like a steam locomotive in the thin air. 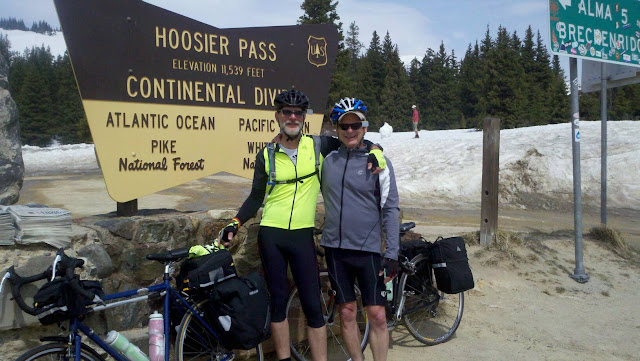 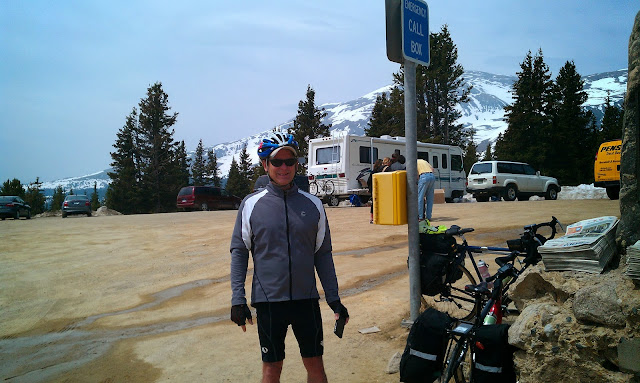 At the top the road was dry, but there was snow everywhere else up there, as you can see from the photos.
The high speed plummet down to Breck was cold, but still fun. There was one set of switchbacks that snuck up on me, requiring two fistfulls of brake to scrub enough speed to get through safely. (Sorry, Kath!)
Tomorrow is only 60 miles and downhill, so we hope to be at our destination by noon or so. The afternoon winds are supposed to include gusts up to 60 mph, so that is as good a motivation as anyone would need.

We left Fred's driveway at 7:49am. We arrived here in Fairplay eleven hours later.


Actual riding time was 8 hrs and 58 minutes to complete today's 87 miles (avg speed 9.7 mph). The weather was mostly great, other than a 30 mph cross-wind for about 15 miles late in the ride. Nevertheless, we climbed somewhere between 5600 feet (my measurement) and 8,200 feet (RideWithGPS's calculation). Most of that climbing was in the first 53 miles, after which we had to deal with that cross-wind, so there were long stretches of 5 to 6 mph. I am really, REALLY tired. Tomorrow is an easy, short day --just have to get up the 13 or so miles to the top of Hoosier Pass (11,500 feet), then coast down to Ray's cabin in Breckenridge to relax the rest of the day.

Here are some photos of today's beautiful scenery, and of Fred with today's pass markers:


I was pretty concerned when I checked the airline's baggage site early this morning and there was still no indication that my stuff had been located. I decided to call, and after some digging the clerk told me that my bag was in Houston and would arrive in CS on the 10:35 flight. She had no information about a second piece of luggage.

At about 10:20 we were on our way to the airport when I got another call from baggage claim that my bag was there in the office. At first I thought that the plane had arrived early, but it appears that the first bag must have come in last night or earlier in the morning. When the 10:35 flight arrived, my second bag, the bike case, was on it. Happy day!

I got the bike assembled this afternoon, and other than the rear wheel needing a bit of truing, everything was fine. 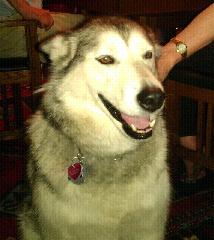 Tonight Pat cooked up a wonderful feast for us, and after dinner Luna, their sweet Malamute, treated us to a little serenade, with Fred and Pat doing backup vocals.

The weather for tomorrow actually looks pretty good. Ray is going to get a very early start (he is planning to do the entire 110 miles to Breckenridge in one shot), but Fred and I will probably start around 8. We will be riding 84 miles with about 5000 feet of climbing.
Here's a shot of Luna after her concert.

I am at Fred's in Colorado Springs. Unfortunately, my bike and gear apparently missed one of the connections. The folks at Continental seem pretty confident that the bags will show up soon, and they will deliver them when they do. Here's hoping!
Posted by Seth Krieger at 6:43 PM 1 comment: