In spite of my best efforts to the contrary, yet again I was the last one ready to roll. At least I was only a couple of minutes behind the other guys this time. We left the cabin at 8:40, all three of us dressed for cooler riding.

When we reached the main road, we turned left toward Hoosier instead of right toward Breckenridge. Although the gradient was shallow, we were climbing immediately, and kept climbing all the way to the top of the pass. After about five miles we pulled off the road to remove our outerwear and take a good slug of water. From this point to the top, roughly four miles, the road would be significantly steeper, especially when going through the four switchbacks.

Back on the road, I told the others that I was going to take it as easy as possible, so they should not worry if I fell back. Fred immediately volunteered to stay with me. I found a satisfactory pace and, with the exception of one short stretch where I slowed down even more to take in a particularly pretty vista, we stayed close together for the rest of the climb. Based on my internal effort-meter I would estimate that the grade was between five and eight percent, though when we drove it later on the way back to Colorado Springs, it looked steeper than that. At about 11,000 feet my breathing, cadence, and effort fell into perfect equilibrium; I felt like I could keep going like that all day if I had to.

All too soon, Fred announced that we were about to do the final switchback. When we rounded the last curve, I still had plenty of energy. On impulse, I upshifted, got up and sprinted the last hundred yards or so. I swear it was not something planned, or intended to mess with Fred, but it took him by surprise. Of course, he responded in kind, and we hit the parking lot at the top at virtually the same time. I was winded from the effort, but once again, I recovered very quickly. I am still amazed at how much difference the interval training has made.

We lounged around up there for twenty minutes or so, chatting with another cyclist who was at the top when we arrived, and taking turns taking pictures for groups of tourists who were stopping for photo ops.

Hoosier Pass is 11,540 feet above sea level. I took some photos to insert right here, showing the view and the sign, but sometime between leaving Breckenridge and now (the next morning) I managed to lose the camera! I know I had it with me in the truck – we stopped to take a picture on the road while driving back. It is possible, I guess, that it was in my lap and fell out of the vehicle on one of our two stops on the way back to Fred’s house. It has a stuffback.com sticker on it, so perhaps I will still get it back. We’ll see. In the meantime, Fred has promised to send me the photos he took with his phone while we were up there. I’ll post them when they arrive.

Our Hoosier ride was 8.9 miles up and 8.9 miles back down, with 1,700 feet of climbing, almost all on the way up. Elapsed time was roughly 90 minutes. I greatly enjoyed the challenge of the climb, and Ray and I had a ball on the descent. Fred rode down very conservatively in accordance with a promise he made to his wife Pat. This weekend is the anniversary of her first husband’s death in a motorcycle accident, some 27 or so years ago.

So ends a fantastic weekend of cycling fun, laughs, amazing scenery, and delicious dinners (prepared by Pat, who loves cooking at least as much as I love cycling). I no longer have any anxiety about doing the mountains on our tour next summer, so the trip was, most definitely, a success.

(Fred sent me his photos. Here they are:) 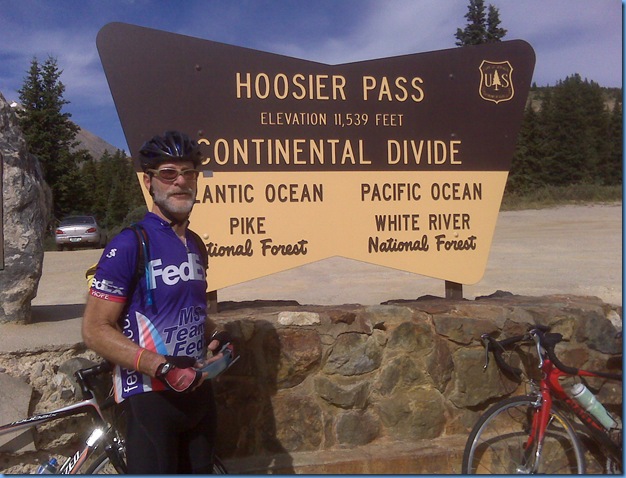 Excellent cell phone coverage. Called Kathy and Steve to share my joy, and pass along a heartfelt “I wish you were here.” 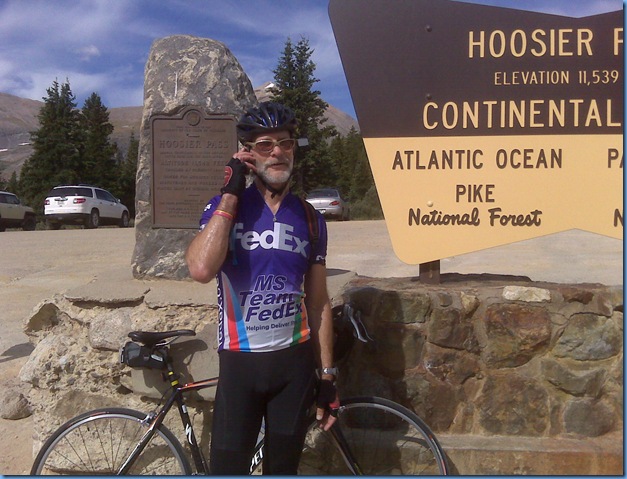 Before I get to today’s account, I want to share some dramatic views of the high plains as we drove from Colorado Springs to Breckenridge at sunset yesterday. 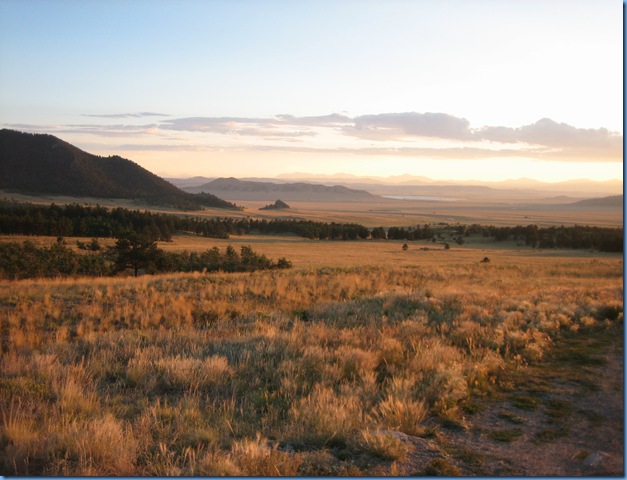 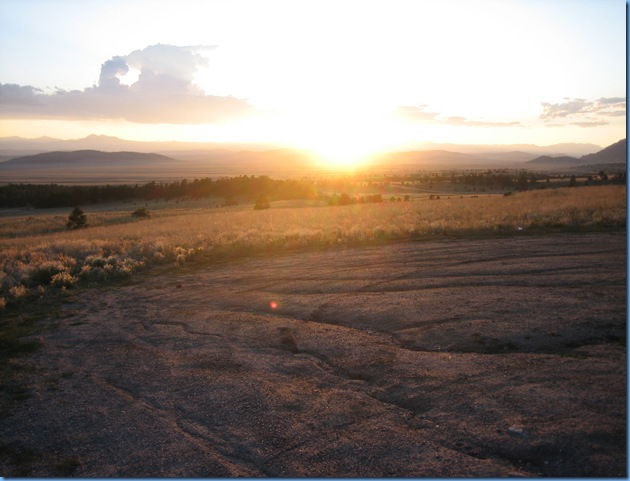 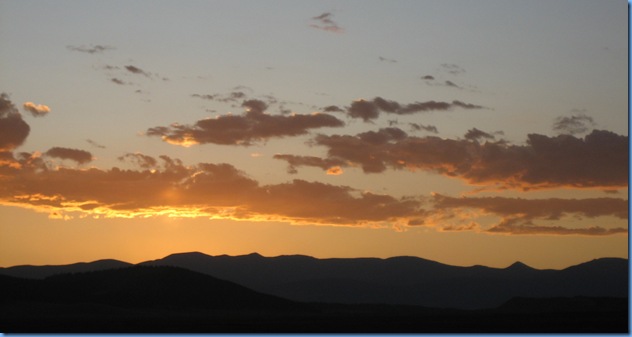 Fred says that you can frequently see buffalo and antelope grazing in the fields. We did not see any buffalo, but I believe that I saw a handful of antelope.

We arrived at Ray’s beautiful cabin in Breckenridge just before 9. It sits on a hillside just above the Blue River, which can be seen and heard through the trees behind the cabin. We sat around telling stories, drinking beer, and laughing until around midnight. It was great to see Ray again.

Here is the thermometer on the deck as it looked at 7AM this morning: 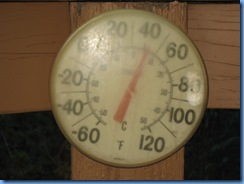 Actually, it did not feel that cold, but we had already decided to wait until 9 or so to leave. When we rolled out at around 9:15, it was already in the 60’s and none of us even bothered with arm warmers.

From Ray’s place, which is at about 9,800 feet, we coasted down a couple hundred feet to the town of Breckenridge. I followed the other guys through town to the starting point of the bike path that we would be taking all the way to Vail Pass (except for a little section in the Copper Mountain complex). 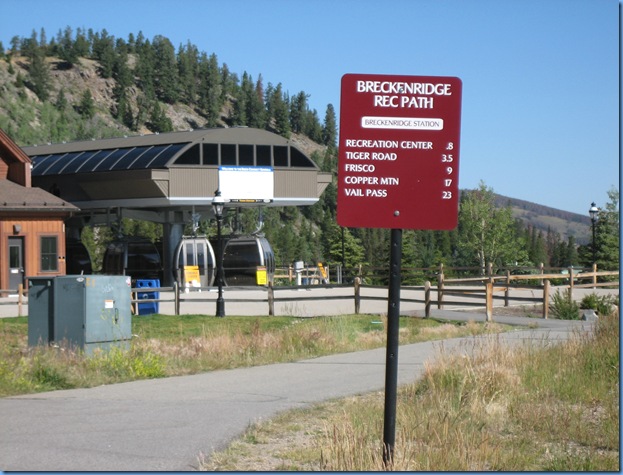 This being Saturday, the path had plenty of bikes, walkers, and runners on it. Given that we were not in any particular hurry, that was not really much of a problem. The first portion was downhill, and as a result, very easy. That was followed by a relatively flat middle section that continued until we got through the Copper Mountain area, at which point the path starts climbing and keeps going up until finishing with a short, steeper section right before arriving at Vail Pass. 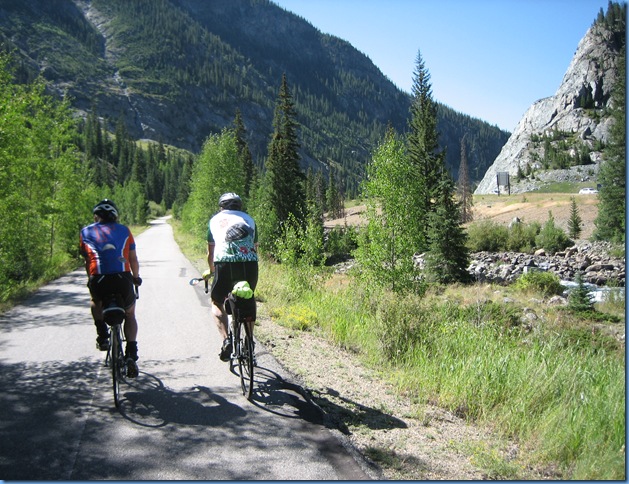 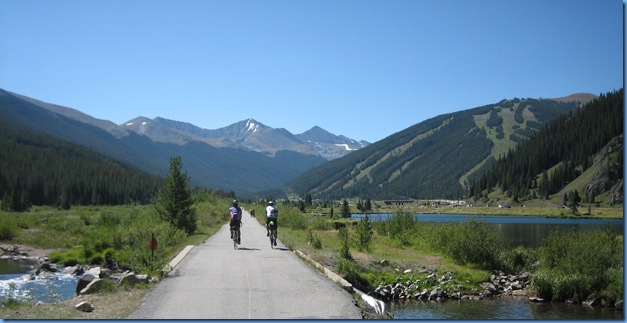 Entrance to Copper Mountain, which was hosting a half-marathon today, adding to the traffic on the path: 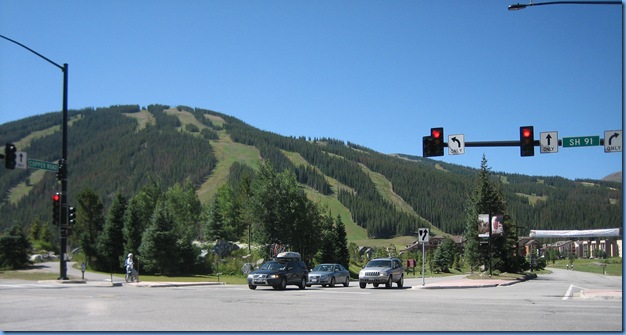 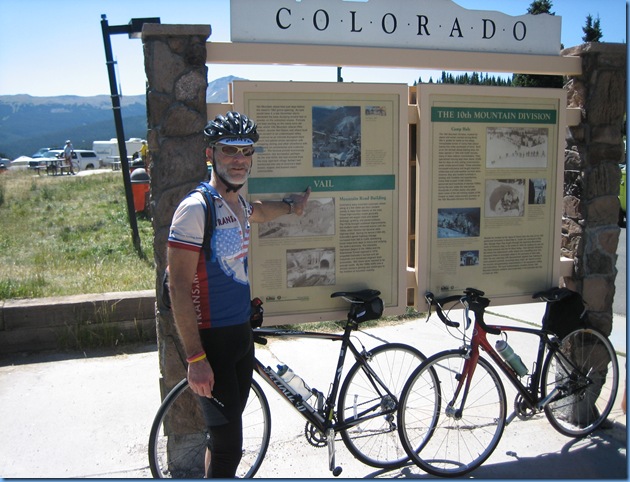 Trail-side mountain walls on the way back to Breckenridge: 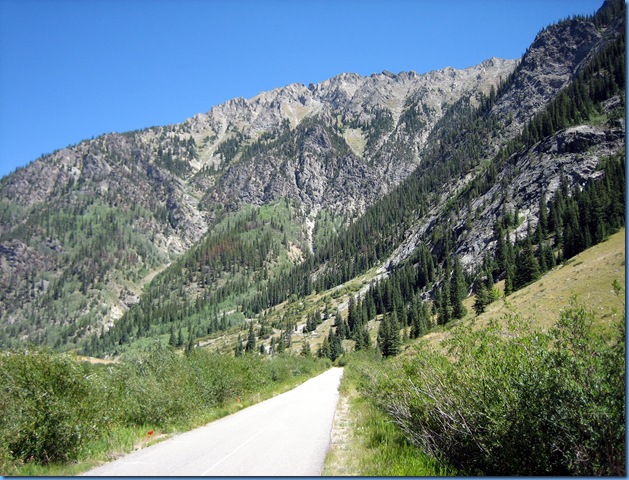 As might be expected, a narrow, curvy trail with a great many users, combined with some downhill sections that invite faster speeds, inevitably results in accidents. Here we wait with other cyclists for an ambulance to come back down the path after picking up a casualty: 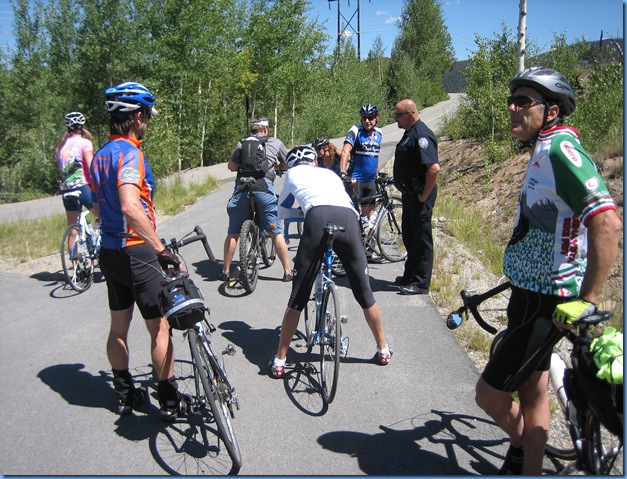 The guy in the center of the photo is an older, very fit, German rider. Fred and Ray got out in front of me right after this picture. I grabbed the German’s wheel and had a good deal of fun catching and passing my friends. After a little while, though, I started to feel my lack of high-altitude hemoglobin, and dropped back. By that time we were only five miles or so from Breckenridge. When we reached town I was pretty well wrung out. I settled into my lowest gear and slowly ground my way back up to the cabin, trailing Fred and Ray by several hundred yards.

All in all, I am very satisfied with how I did today, less than 48 hours after arriving in Colorado. I have not had headaches or any significant altitude-related issues, beyond feeling slightly out of breath. Obviously, I am unable to ride the way I do at sea level, but I did well enough. So far, it looks like it will be sufficient to fly out here a day or two before we start our tour next summer. Tomorrow we will ride up Hoosier Pass, which is almost 1,000 feet higher than Vail Pass and on our route on the second day of the tour next summer. Stay tuned!

Posted by Seth Krieger at 6:15 PM No comments: