Almost always, about 15 minutes into a ride, I feel great and can't figure out why I ever have trouble getting off my ass and onto the bike. Yet, often, especially with early morning rides and when the weather is not perfect, making the decision to ride is a struggle.

I have found, however, that having a goal, such as preparing for a tour or a bike event, is enough to make the decision to ride much easier. Once the Geezer Geyser Tour ended, I was left with no motivator at all. We have a fuzzy plan to do a three or four day pannier tour in the fall with Steve and Debi on the tandems, but absolutely nothing has been decided beyond that. To stay on the bike in the meantime, I had to come up with some sort of goal.

I have no recollection how I came up with the idea, but I have committed myself (now publicly) to riding up Sugarloaf Mountain Road (arguably the most challenging climb in the area) at least once every week for a year. It is only a half-mile climb, with a gain of only 200 feet, but the grade is mostly 10%, and as high as 13%, on the way to the top. 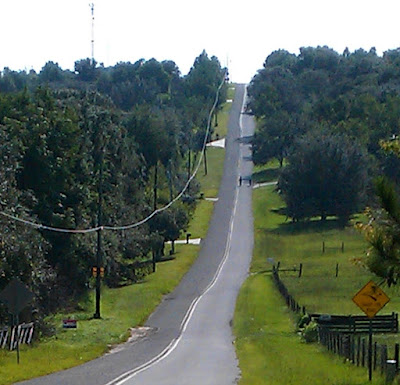 Sugarloaf is very convenient for me, being only 4.5 miles away by the most direct route. I have worked out a more circuitous out and back route, however, that is just the right length for me to ride in the morning before work. It works out to 19 miles with 1,250 feet of climbing, total. The route is all back roads, with the exception of crossing US-27, so it also ends up safer than several other routes that I have tried since making the weekly commitment.

The year started June 29th, so I have a couple of months ticked off already. I am hoping that this goal will be sufficient motivation to keep me riding through my "slacker" months of December and January. Now that I have all the cold weather gear I accumulated leading up to, and subsequent to, this year's trip out west, there will be less reason to wimp out with the "It's too cold" excuse.
Here's hoping, anyway!

Posted by Seth Krieger at 1:09 PM No comments: