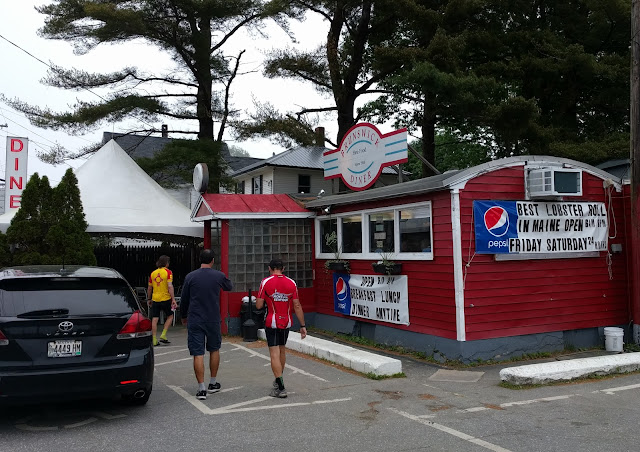 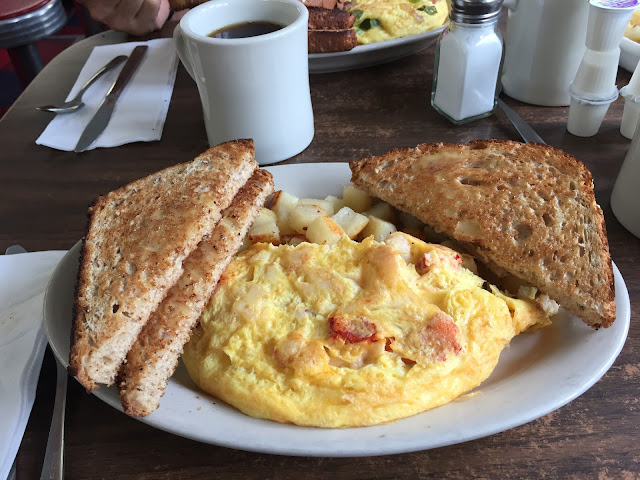 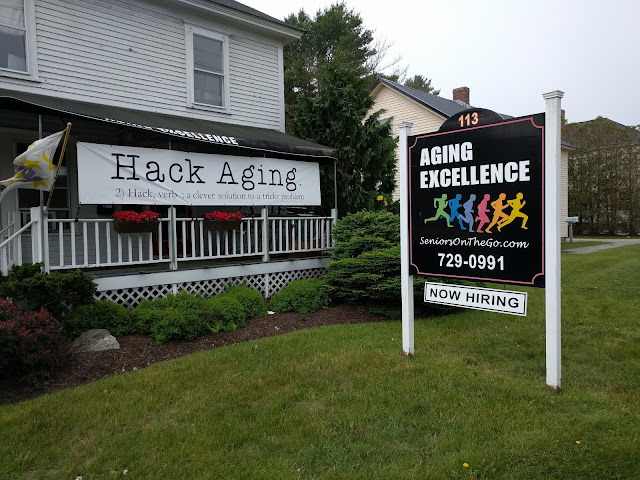 This business is located between the hotel and the diner. "Seniors on the Go" seems somehow appropriate for our group, even if Mitch doesn't quite qualify just yet.

An hour or after breakfast, we were back on the road and soon hit the first (and by comparison to what came later) the easiest climb of the day -- the bridge over the Androscoggin River. 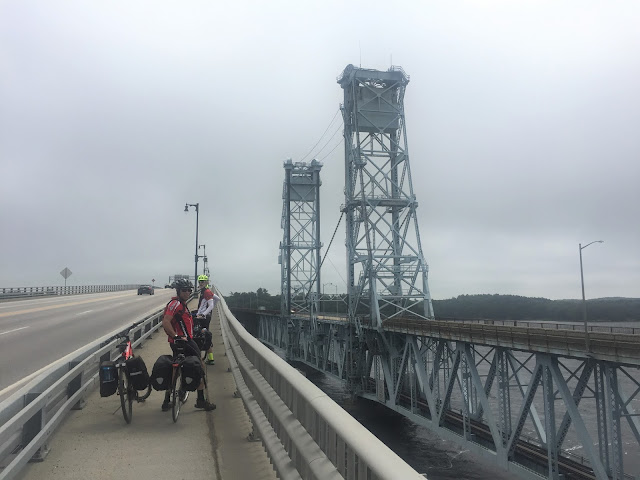 Steve and Seth. Photo by Fred.

Pretty soon, the sky cleared, it warmed up, and we were treated to some pretty fine Maine eye candy. 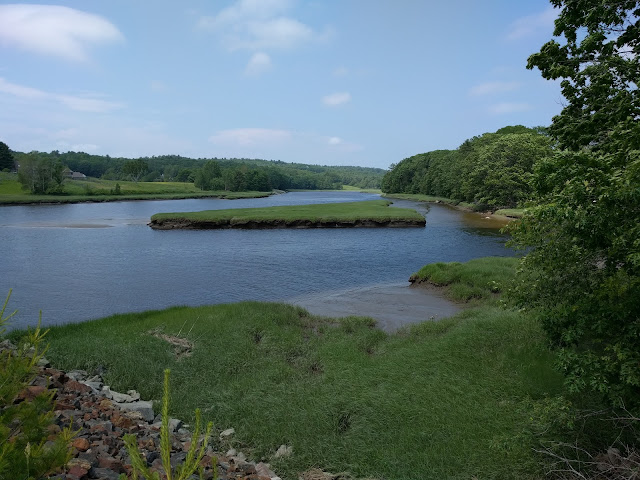 In fact, it warmed up enough that these guys, delivering many tons of ice to convenience stores each day, figured that it wasn't such a bad job after all. 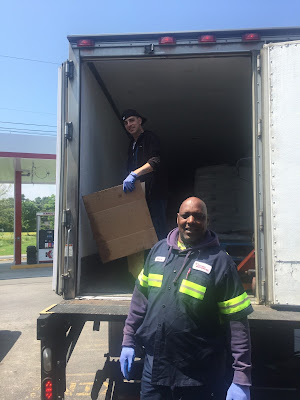 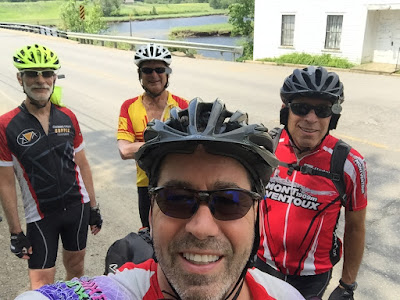 Lunch was water-side at Schooner Landing in Damariscotta. Over the many years I have dined with Steve, he has been the last one served more than his fair share. On this occasion, he was left nursing his beer while the rest of us finished our meals before his own finally appeared. Our waitress was sweet, but spectacularly incompetent. Perhaps it was her first day of a summer job with zero training? Anyway, when the checks arrived, Steve complained that there was no compensation for having to wait so long for his food. She offered that he didn't have to leave her a tip. Steve was having none of it, and sent her to talk to her supervisor. Eventually she returned with an amended check, but never took his credit card or asked for payment for his meal. Finally, we simply got up and left, with Steve feeling a little better about his meal that ended up being on the house. 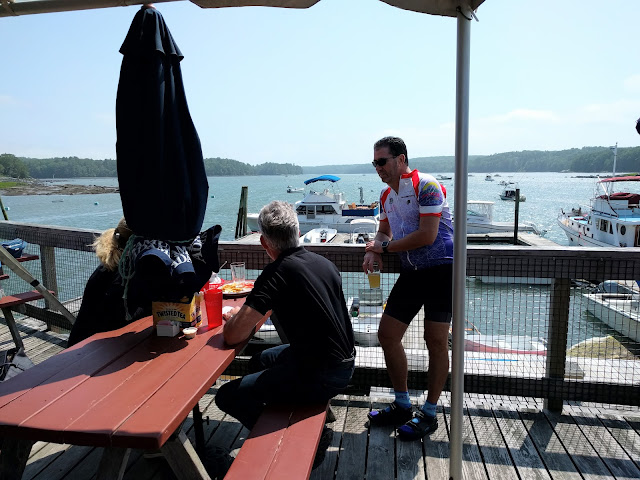 Mitch chatting up a couple of our neighbors at Schooner Landing.

Between Damariscotta and Moody's Diner and Motel in Waldoboro, we climbed approximately 357 gazillion hills ranging from 10 to 15% (or maybe more). Somewhere along the way, I even got off and pushed my bike up the steepest section of one of them. When we finally got to Moody's, it was a cruel joke to discover that while the diner was at street level, the motel (which is actually a cluster of cabins) was at the top of a hill that was a match for anything we had just climbed!

Once we had reached the summit, we were checked in by the elderly, but perky and talkative, daughter of the original Moody who opened the establishment exactly 90 years previously. I believe that literally everyone living in the great State of Maine has visited Moody's Diner at least once in their lives. The 90th anniversary meant at least one important thing for some in our group: Moody's famous pies were on sale for 90 cents a slice instead of the normal $5 to $6! Food at the diner was a challenge for me. Eventually I settled on eggplant parmesan with spaghetti but without the parm. I couldn't finish it all. The other guys seemed satisfied with their choices. Steve and Mitch were very pleased with their peanut butter pie, especially at the anniversary price.

One little tech note. I use a Google Nexus 5X cellphone with Google's Project Fi service that automatically picks the strongest cell provider among T-Mobile, Sprint, and US Cellular here in the States. Today I noticed that I was connected to US Cellular for the first time. Project Fi also provides service, including high-speed data, almost everywhere in the world for the same data rates it charges here in the US ($10/GB, charged precisely based on actual usage), with no need to swap SIM cards. My wife and I spend a good deal of time in Europe each year, so that is a killer feature for us. The catch is that you must use one of a very few phones to get these features. Highly recommended for Android users who generally don't use very much data. 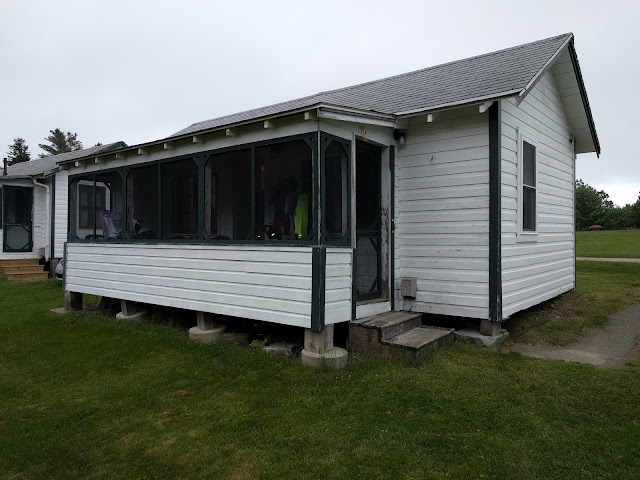 The cabin at Moody's that Steve and I shared. Basic, but clean.

Posted by Seth Krieger at 6:17 PM No comments: