Visitors from the Euro-Tourist Zone 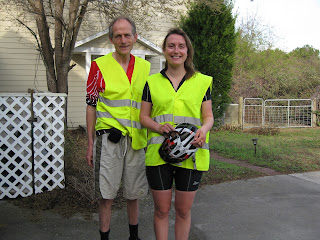 Say hello to Kleis and his daughter, Ina. Kleis is from the Netherlands and Ina just graduated her studies of theater in Belgium. They decided to spend a month touring the US and picked the Adventure Cycling route most likely to be warm this time of year (people after my own heart). WIth that in mind, they flew into Houston and have been roughly following the Southern Tier route across the southeast. Their destination is Miami.

Ina found me listed on WarmShowers.org and sent me a message asking if I would be willing to put them up for a night or two. This was the first time that we have hosted anyone through WarmShowers, and I admit that I was a little uneasy. The web site provides members the ability to leave "recommendations" for one another, but Ina had little information about herself in her own listing, and there were no recommendations. I asked her for more information and she told me more about herself, her father, and their trip. After talking it over with Kathy, we decided to take a chance. One look at them when they arrived was enough to put my mind at ease. We had a wonderful visit, and they seemed to appreciate the hospitality that we were able to provide. The next morning I rode out with them and guided them out of town.

It was the next best thing to being on tour myself. If you are a cyclist who enjoys touring, check out warmshowers and consider joining. 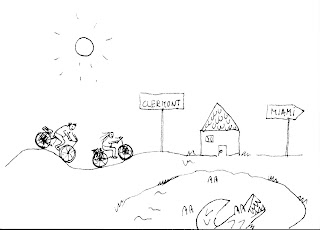 Posted by Seth Krieger at 10:58 PM No comments: