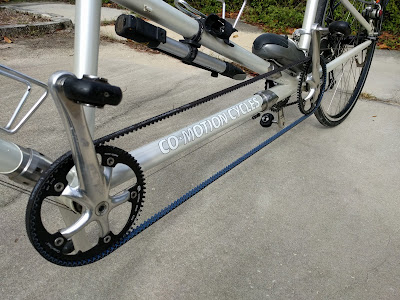 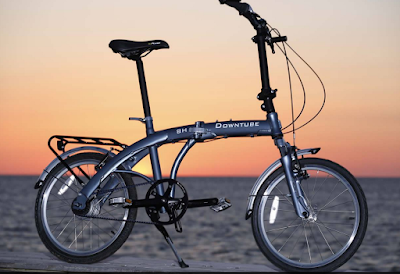 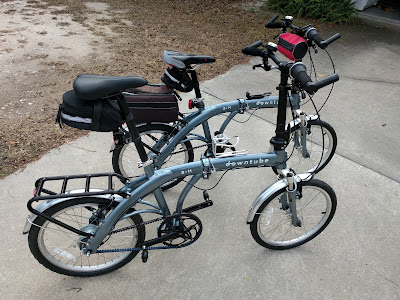 Between 2008 and 2015 early June generally found me on a long distance bike trip somewhere. Last year's trip to the UK did not exactly go as planned, and neither my touring buddy Fred nor I were motivated to put something together for this year. Still, I have recently felt a need to do some kind of trip, even if just a night or two. A previous plan to do a little tour with Mitch earlier this spring fell apart, mostly on my account, but then I noticed that Adventure Cycling Association had declared June 3 - 5 to be National Bike Travel Weekend. It is the latest of ACA's continuing effort to make bike travel more approachable to more people, legitimizing "bike overnights" and trips of just a couple of nights.

In the absence of a "big" trip, I latched onto the idea and recruited two friends, Roger and Steve, to join me for a very casual, easy overnight trip in northwest Florida. The starting point I selected was Fanning Springs, a tiny town west of Gainesville. From there the route took us south to Cedar Key, a popular spot for fisherman that also has a bit of artsy, Key West feel to it. The town has long hosted an art festival in the Spring that my wife Kathy and I think we might have attended decades back when we were in school in Gainesville. Anyway, it seemed like as good a destination as any so I created an 80 mile loop that started in Fanning Springs with a night in Cedar Key. 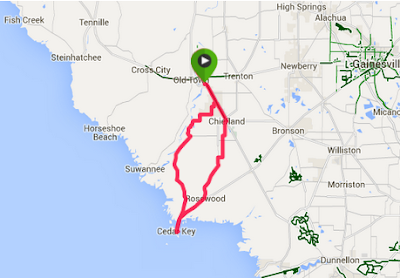 We left at about 6:30 on Saturday morning, driving the the two hours from my house up to our starting point. Somehow or another, it still took us another hour after arriving in Fanning Springs to start riding. Much of the outgoing route paralleled the famous Suwannee River. About 15 miles into the ride we stopped for a little riverside rest in some shade. 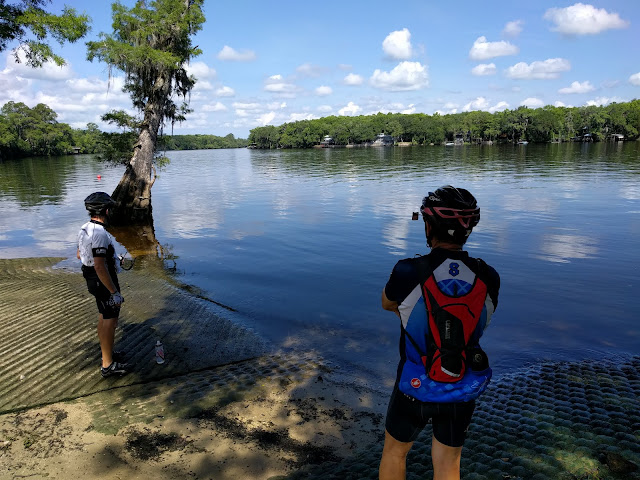 Back on the bikes we found ourselves on a sandy, unpaved road for what seemed like a couple of miles. I was riding my touring bike with the 35mm tires I had mounted for last year's UK trip, so the road surface was a non-issue for me. Steve and Roger, however, were both on 23mm road tires, so we rode slowly and carefully in case of a deep patch of sand that could cause a fall. Eventually we made it back to pavement and we returned to the comfortable 14 to 16 mph pace that we had been riding previously.

The route was exceedingly flat and there was not much wind, so the pedalling was easy. That is, it was easy for Roger and for me, but not so much for Steve, who, in spite of being the strongest rider in the group, was working hard to keep up. Finally Roger noticed that Steve's rear wheel was WAY out of true -- a pretty sure sign of a broken spoke. It took only a minute to confirm that it was a spoke nipple rather than the spoke itself, but the effect was the same. Every rotation of the wheel rubbed the rim against the brake pad on the bulging side of the rim, so Steve had been quite literally riding for about an hour with his rear brake on. The good news was that a broken spoke nipple is much easier to repair on the side of the road than a broken spoke would have been. Steve quickly fixed the wheel and we were back on our way.

It was now about noon and it had become very hot under an intense sun with little shade. I drank the last of my water and was starting to feel light-headed, so I requested a stop at the first place that might possibly have a cold sport drink of some kind. About 10 miles from our destination we found a tiny "grocery store" where I drained a quart of Gator Aid and Steve poured a can of Pepsi caffeine and sugar down his throat. He announced that he felt more like he had just ridden a century rather than 30 flat miles. Our final 10 miles were hot but went by without further excitement.

Roger had taken on the responsibility of finding us lodging a couple of weeks earlier and had reserved a two bedroom condo for the night. Lots of places in Cedar Key won't even rent for a single weekend night, but luckily this one did. With the exception of being able to hear way too much noise from the neighbors, it was a very comfortable and roomy place to spend the afternoon and evening.

About 3 in the afternoon we headed out to find something to eat. We ended up at a restaurant called Steamers. There was a pretty extensive menu, but all three of us ordered blackened Mahi sandwiches that were tasty and filling, accompanied by two beers each. We returned to the condo for some horizontal time, though Steve, a master sleeper, was the only one who actually slept.


At dinnertime nobody was hungry, so instead we each bought a pint container of ice cream at a nearby grocery and consumed it before turning in for the night.

We were back on the bikes by 8 AM or so on Sunday. It was a near perfect ride. The weather was a bit cloudy, which kept the heat down, there was little to no wind, no traffic, and the last 10 miles were under a canopy of oaks on the Nature Coast Trail. The only unusual event was when we encountered a wild boar crossing the road with a bunch of little boar-lets. Eight or nine little ones crossed the road ahead of mama boar. When she reached the other side she turned and stared right at us. We stopped our bikes and kept our distance, not quite knowing what to expect. A moment later another batch of little ones popped out of the bushes on the other side of the road! Once the second group of youngsters made it across, mama followed them into the brush and we felt safe to continue our ride.

All in all, it was a very enjoyable weekend. One note is that I decided to forego any official riding jerseys on this trip and wear hi-viz technical t-shirts instead. The looser fit made me more comfortable in the heat, I think, and I will probably do the same thing on future hot weather trips.