After a great breakfast at our wonderful B&B (Avera-Clarke House in Monticello), we set out for what we expected to be a 40-ish mile loop ride up toward Quitman, Georgia. It turned out to be a 49 miler, the last hour or so being too hot for comfort. I was pretty much wrung out by the time we finished up.

Maybe eight miles or so into the ride, I decided to drop back to see if maybe Steve and Debi were having a problem holding air in their rear tire. (They had a flat on yesterday’s ride and the tire was flat again this morning.) They were lagging way back, and Kathy and I were not riding hard. Something had to be wrong. As soon as we fell in behind them, it was obvious that they had a problem with the rear wheel; it was way out of true. Steve quickly identified the problem as a bad spoke. It was not broken, however. This time it was the nipple that had cracked! In short order, he did a great job of securing the spoke and truing the wheel. In my opinion it ended up more true than many intact wheels I have seen. There were no further problems and we completed the ride without further incident.

After lunch at a little coffee place called Starducks (really), Steve repaired the wheel. Below he re-inflates the tire after the repair. The location pictured is the breakfast room of our B&B. 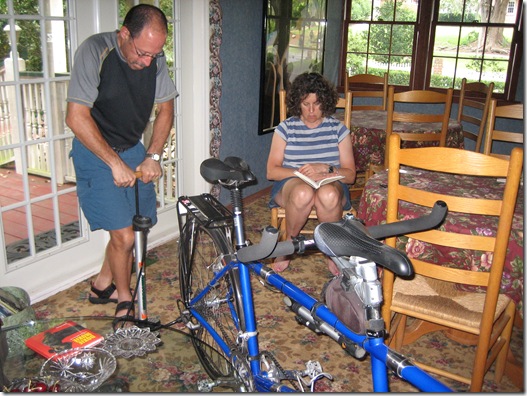 Dinner tonight at Three Sisters was our best in Monticello.

In our down-time I have been reading Ghost Trails by Jill Homer, available through Lulu.com in either paper or ebook form, about her adventure riding her bike in the Iditirod in 2008. I found this 188 page account to be very compelling and I highly recommend it. She also has a blog here on blogspot called “Up in Alaska”. You can also find Jill’s book, and the Kindle version, on Amazon.