Kathy was back on the bike today for a 42 mile loop south from Monticello to Wacissa Spring. This was a real nice rural route with rolling terrain and lots of five to eight percent grades. At the end of the ride, she felt pretty good. In fact, her back felt better than it did yesterday, when she did not ride at all.

A couple of days ago Steve pointed out that Kathy has a great deal of motion in her upper body and wondered if maybe that was contributing to her back troubles. It seems a bit unlikely, as that is a pretty established habit and she does not normally have back pain after riding. At best, however, it is wasted energy that we would like to put to better use, so today we made some adjustments to her position to try to minimize the extra movement. Nothing we did made much of a difference, however. We’ll try a couple of other things over the next few days, but we may well go for a professional bike fitting for her after we get home.

Wacissa Spring itself was beautiful. We spent 30 minutes or so admiring the crystal-clear water and pretty setting. There was a group of young girls swinging from a tree or jumping from a high platform into the spring. Apparently the water over there must have been pretty deep, because nobody got hurt and they seemed to be having a great time. 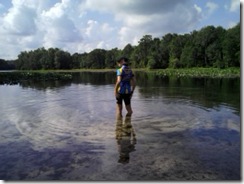 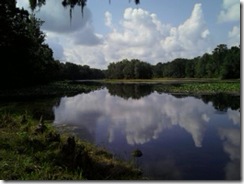 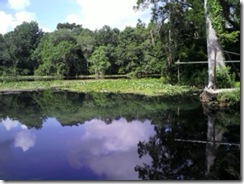 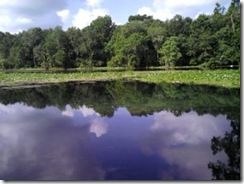 We had a delicious, if not ample, lunch at Tupelo’s Cafe on our way back from our ride. Later in the afternoon we toured the two Dollar Stores in town, a bike tour tradition. The best deal, hands down, was a Steve Martin DVD that featured a photo of Steve and a dog on a tandem bicycle on its cover. The Katzmans paid 50 cents for it!

In keeping with the bargain theme of the day, we gobbled down two 18 inch pizzas for $18 at the pizza place in town. This was certainly our least expensive dinner of the trip, but it was pretty good.