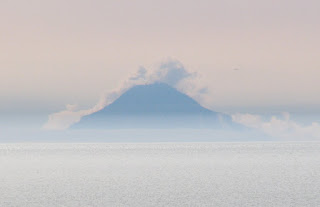 The Augustine Volcano, shot from 75 miles away! There is a speck at around 2 o'clock that looks like it is probably a plane or helicopter (Double-click for an enlarged image). 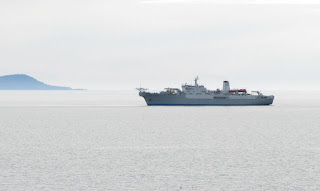 
The reason for this trip is actually to provide my father and me with time and a setting that would provide us with a good opportunity to share personal stuff with one another. In that regard, today was very successful. On the other hand, there was not much action on the secondary front, wildlife photography. My father was not feeling well enough for us to pursue a whale watching expedition today. We did see an eagle or two, but no photos. Nevertheless, there was a surprising, yet dramatic photo op that appeared suddenly this afternoon.

I walked out on the terrace behind my room late this afternoon to take in the view and saw something very strange on the Southwest horizon. Further inspection with binoculars and camera revealed a perfect conical shape, sitting by itself on the water line in the far distance, with "smoke" coming from its peak. It looked just like a volcano! Well, a minute or two of googling established the feature to be nothing other than an uninhabited, volcanic island called "Augustine" at the mouth of Cook Inlet, 75 miles from our hotel. It turns out that there is a chain of dozens of volcanos that make up the Aleutian archipelego and continue into the Alaskan mainland. Augustine is one of these volcanos, and has been active as recently as 2006. It is of particular concern in this area because when pieces of the island fall into the sea during seismic activity, they often cause tsunamis. Portions of Homer, the town in which I am currently sitting, are barely above sea level and would be washed clean within an hour of a large mountain fragment hitting the water.

Possibly related to the local volcanos, for the past 24 hours the cable-laying ship Global Sentinel has been slowly moving back and forth in the inlet near our position. I cannot find any information about her current activity on the web, but in 2007 she was used to install an array of seismic instruments and sensors on the ocean floor near San Francisco. It seems quite possible that she is doing something similar here in the Cook Inlet. Not that I know a whit about laying communication cables, but her pattern seems unlikely if she were just installing fiber-optic comm cable. At any rate, it has been interesting to watch.

Tomorrow we head back to Anchorage, a five to six hour drive. Hopefully, my father will be feeling significantly better.