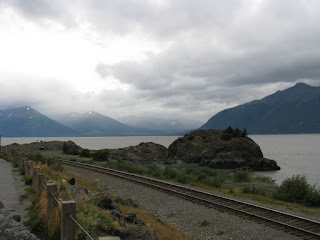 Beluga Point on the Seward Hwy

Today we met one of my customers and his wife for breakfast. Both are delightful, interesting people and as a result both Dad and I had a very enjoyable morning. We returned to the hotel, finished loading the car and started our drive toward Seward under heavy, gray skies. We stopped briefly at Beluga Point on the Turnagain Arm to take a few photos. The wind was blowing at about 30 mph, which made the 52 degree temperature feel far colder. I asked a couple of bicycle tourists which direction they were headed. Luckily, the were headed downwind. Within a few minutes it started raining, and it has been raining, at least lightly, ever since.

Every so often we passed signs saying, "Caution - Bicycle Race", and soon we begain to pass cyclists wearing numbers, pushing along into the wind and rain. Apparently there was a road race today over the same 115 mile route that we were driving. To our surprise, the finish line was literally in the parking lot of our hotel just outside of Seward! This event was close to the complete cycling nightmare: extreme wind, temperatures hovering around 50 degrees, and almost constant rain over a very long, hilly course. I will say, however, that there was a decent shoulder almost the whole route. We saw nobody wearing rain gear, but quite a few wearing just shorts and a short-sleeve jersey! Amazing! I mean, it was COLD! Whenever we left the car, appropriately dressed, we hurried back to shelter as soon as we could; it was most uncomfortable out. Part of me envied the riders, but there is no way I would have been out there without good rain gear.

The rain was unfortunate because it limited our enjoyment of the scenery the photos hint at. I was hoping to take the Alyeska Tramway near Girdwood up into the mountains for a better view, but with such limited visibility, it would have been pointless. Hopefully the weather will be clear when we drive back up the highway on Friday. We didn't bother with any more stops and just continued straight to our hotel, The Seward Windsong Lodge, taking care to give the cyclists plenty of room so that we did not add to their misery.

After settling in, we went for a ride to look around Seward to find somewhere for an early dinner. Seward is a small town -- about half the population of my own little town of Clermont.
There is, however, an active waterfront area. The picture above shows the small boat marina. You can see a large Holland-America cruise ship in the background. The photos also include a view of Resurrection Bay. You can make out the mountains across the bay.
We checked with a couple of the companies that run boats that do wildlife tours in the bay and area fjords. It was no surprise to learn that the tours were running alternate, less desirable routes today and tomorrow because of the weather. In order to get from the bay to the fjords, it is necessary to get out into the open water for a little while, but the waves are currently ten feet or better. None of the operators will go out there under those conditions. There is a chance that things will be better on Tuesday, so our plan at this point is to stay on land tomorrow and try for a full-day cruise the next day.

Email ThisBlogThis!Share to TwitterShare to FacebookShare to Pinterest
Labels: Alaska