Not cycling, but worth sharing - Alaska Kenai 2008 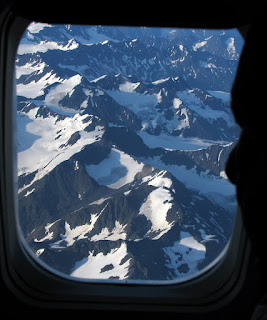 My father and I have arrived in Anchorage after a long day of flying -- Orlando to Dallas (a bit over two hours), then Dallas to Anchorage (about six hours). Given that it is way late, this will be a short post, but I hope to have lots to share over the next week. We will be spending several days in Seward, which is on the south side of the Kenai Peninsula, then a couple of days in Homer on the north side. We expect to see and photograph lots of wildlife, from birds to whales.
As on my previous visit to Alaska with Kathy years ago, I was knocked out by the awesome nature of this place before we even touched down. This photo gives you a glimpse of what is visible for the last several hundred miles of the flight. Snow-covered mountains and glaciers as far as you can see. It is just incredible.
Posted by Seth Krieger at 2:34 AM