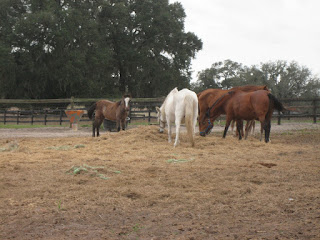 After checking the weather forecast, wind in particular, we switched back to the original plan. Again, the ride start was delayed, and again Mitch was the culprit. We had agreed to meet at the restaurant in front of the motel at 8am, but Mitch fell back into a very deep sleep after waking up for a couple of minutes at 6:30. Fred eventually roused him by pounding on his door at 8:45. It was probably close to an hour before we were under way.

A few miles up the trail we helped an older woman who had gotten a flat, then continued to the north end of the Withlacoochee trail. The gps had us routed onto non-existent roads, but after a few minutes we figured out an alternate and before long we were moving north on SR 41, a busy two lane highway that took us into Dunellin. At 22 miles we stopped at an Italian place for lunch. Apparently they were seriously short-staffed in the kitchen, so it was at least 90 minutes before we were back on our bikes. At this point it was already 2:00 PM, so we figured there was no way we could do the planned 70 miles.

We came up with what we thought would be an alternate route that would save us about 15 miles. It was actually quite beautiful and meandered through non-stop horse farms for 25 miles or more. I am sure that it was at least as good as the route I had originally planned.

The problem arose when we could not find the B&B where we expected to spend the night. In retrospect, it was probably set back off the road and we rode right past it, but it was quickly heading toward dark and raining lightly so I began to get pretty concerned that we were going to end up riding in the dark with just rear flashers and no headlights (except for Mitch). After a brief roadside discussion we decided to make for a Courtyard hotel at SR 200 and I-75. We were doing OK, until again the GPS tried to route us on non-existent roads. A local gave us general directions about how to get to SR200. His faith in the GPS still intact, Mitch took a left down a dirt track while Fred and I followed the directions, returning to GPS guidance only after it was clear that it was safe to do so. It was now quickly getting dark so we picked up the pace, pushing along at 18 to 22 mph, and pulling up to the hotel doors at 5:59, just as the day's last light disappeared.

The high point of the day was completely unexpected. At the lobby bar we met Carol, a lovely woman in town to check on some race horses that are being boarded in the area. We ended up talking for a good hour -- a little about horses, but mostly about her 19 year old daughter, who has Aspergher's Syndrome but went undiagnosed until relatively recently. We encouraged her to read Temple Grandin's books, as Dr. Grandin's descriptions match her daughter's experiences precisely. I also learned that the masks that we see over the eyes of horses from time to time are used to prevent fly infestations! I have been wondering about that for 20 years or so, and finally have an answer. Anyway, it was a wonderful exchange and a great end to a day that was less than ideal in other respects.