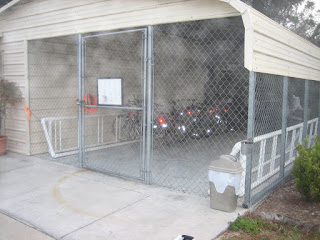 Saturday, Jan 10: First day of the mini-tour with Fred and Mitch got off to a slow start as Mitch misjudged the time it would take him to get ready. Instead of rolling at 9:00 as planned, we finally got on the road at around 11.

Mitch WAY overpacked, with his rear rack piled high with panniers stuffed to bursting, plus the fold-out panniers of his rack trunk also packed full. He wisely decided to leave his jeans behind, but that hardly made a dent. Propelling all this weight eventually took its toll, especially in light of the fact that he really has not done any significant riding in quite a while.

We rode from Clermont to Inverness, taking a somewhat circuitous route that added around 10 miles to what the direct route might have been. This route of about 60 miles took us approximately five hours. The weather was spectacular and the last 15 miles or so on the Withlacoochee trail were particularly nice. I have ridden that trail many times before but almost always in the summer. The pleasant temperatures and the thinner winter foliage allowed me to see things along the trail that are hidden in the summer, such as the camel sharing a fenced in field with some goats!

Fred's back, specifically sciatica, was troubling him by the end of the ride, and Mitch had a rare set of matching cramps in this thighs. We found our hotel in Inverness without any difficulty at all. The clerk in the office was less than hospitable -- almost rude, barking out the rules, which included no bikes in the rooms. That was not so bad because they have a covered locked area specifically for bikes, but the deliverary of the information was off-putting, at the least. Mitch ignored the bike rule, but Fred and I did as we were told, locking our bikes in the provided bike-jail overnight.

After getting cleaned up we walked up the road to an all-you-can-eat Chinese place called Evergreen that was actually quite good.

We have decided that we will head south tomorrow, scrapping our original plan to tour the horse farm country up near Ocala.