Today we finally crossed from Colorado into Wyoming. In spite of the fact that we were being blown along at a near-effortless 25 mph, we stopped for the obligatory state line photo op. 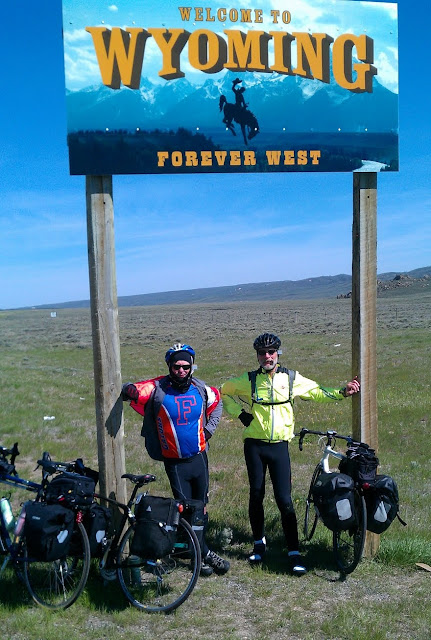 Back on the bikes we flew the next six miles, all the while closing on a large mass of white smoke rising into the sky. The fire itself was nothing much, but there was an awful lot of smoke being blown directly at the road we had to climb to get out of the basin in which we had been riding. I knew it was going to take me quite a while to work my way up the two and a half mile climb and I did not want to be sucking all that smoke into my lungs. I ended up using my balaclava plus a couple of additional layers of stuff as a makeshift breathing mask. Ray, on the other hand, did nothing special and says that he didn't even smell any smoke! I sure as hell did. At any rate we all seem fine tonight.
A shift in wind or road direction later in the day slowed us down quite a bit. We took a rest break in front of the store in Riverside, just across the street from the famous Mangy Moose bar. While there, we were joined by a young couple, Jessica and Chris, on fully loaded bikes, including camping gear. They are 50 days into their cross-country trip. After talking for a while I took a photo of them, which reminded Jessica that she had not re-packed their camera when they stopped 8 miles north. Given that we were headed up that road, we promised to look for it. We traded contact info and off we went on our mission. We found the spot easily enough, but we could not find the camera. I left that sad news on Jessica's cell phone voice mail. Hopefully the camera will turn up in their gear or the camera case contained some ID that will allow it to be recovered. 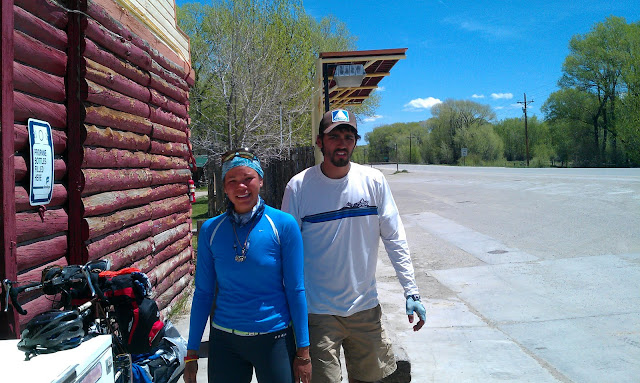 We are unable to visit Saratoga's hot spring. The river has already risen so much that it has overflowed into the spring, making the latter unsafe to use. As I write this post, sandbags are being deployed to defend the low-lying property from flooding as the river continues to rise with the melting of this year's extreme snowfall in the upstream mountains. Flooding is a real danger for many of the towns on the rest of our route.
Tonight Fred initiated a change in our dinner plans after we were seated in the Wolf Hotel's restaurant. (We were staying at the Wolf Hotel for the night.) On his way back from the Kum-n-Go convenience store (no, I am not making that up, and Fred was there to buy a store logo t-shirt) Fred spied a Thai restaurant up a side street. He promised the proprietress that he would return for dinner. This behavior is similar to the time on the original Tour de Fred trip when he disappeared to have lunch with the Indian hotel-keeper.
He insisted that we were not bound by his promise, but we decided to go along with him. We were the only customers. All cooking, service, prep and cleanup was handled by the new Thai wife of a guy who talked our entire meal about his four marriages, his experiences in the military and how he learned to cook many styles in his travels around the world. Nonetheless, his wife does the Thai cooking (and serving and cleaning, we noticed, in spite of their "equal" marriage).
Fred paid for all the meals and added a 40 percent tip, which clearly had nothing to do with the meals or dining experience. Ray and I agreed that it was one of the strangest restaurant experiences we have ever had. Fred, on the other hand, was happy because his mouth was burning "in a good way," which apparently made up for everything else, in his view. Oookaay then.
Tomorrow we have a short ride of about 40 miles. I am planning to do it in a very easy, rolling recovery mode. We'll see what happens.

Published with Blogger-droid v1.7.0
Posted by Seth Krieger at 12:39 AM