Our friends back home are going to be amazed that we could find ourselves completely satisfied – no, DELIGHTED with a ride of 12 miles, but we were. A bit of today’s ride was over roads we have travelled before, but most of it was not. We did a few kilometers on a beautiful little farm road close to our villa, then up to St. Didier before curving to the south and working our way up toward La Rocque sur-Pernes, Le Beaucet, and up to Venasque from the south. There was lots of steep climbing along the way. At the end of the ride we hung out in our home village of Venasque, exploring more than we had all week. It is a lovely little place and well worth visiting. 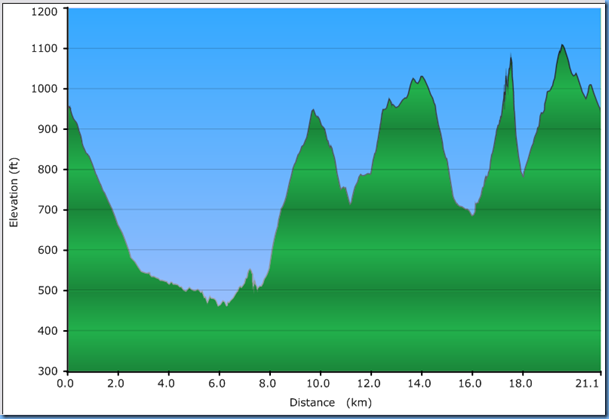 Although we have ridden relatively few miles this week, we have climbed like goats, enjoyed incredible scenery, weather, food, and friendship. It is hard to imagine a better week of vacation or of bicycling.
Tomorrow we will part ways with Fred and Pat. They will enjoy another couple of days in Provence, while Kathy and I drive north with the Katzmans, with a planned short stop in Burgundy, then on to Giverny (Monet’s garden) and Paris.
I will close this portion of the trip report with a short, tragic fable:
Jean-Fred and Juliette-Patrice were lovers in ancient times in the village of Venasque, France. One day Jean-Fred spotted some berry-like fruit that he did not recognize hanging from a tree in the garden. Known to be something of an impulsive young fellow with a taste for anything remotely resembling a grape, he plucked several berries, tossed them high in the air, caught them in his mouth, and gobbled them down. 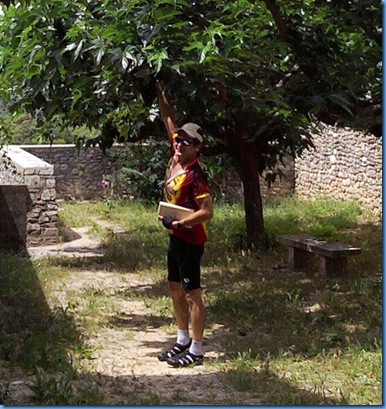 He attempted to interest Juliette-Patrice in the berries, but she proclaimed that nothing would pass her lips that had not been featured at one time or another as the secret ingredient on Iron Chef. An hour later, poor Jean-Fred was not feeling so well. He staggered over to the town’s boulangerie where he bought and ate a piece of pie (pizza pie), but alas, he became even more ill and passed on to his next life as a digger of prehistoric artifacts in India. Juliette-Patrice, overwhelmed with sorrow, found herself back under the very fruit tree from which the deadly berries had been plucked. Only then did she see the warnings scattered nearby:

The moral of the story is that one should always check for dead birds prior to eating strange berries, no matter how sweet. (Important safety tip!) If you happen to ignore this advice, try mass quantities of pasta, fresh garlic, and wine. It seems to be an antidote.
Posted by Seth Krieger at 5:54 PM